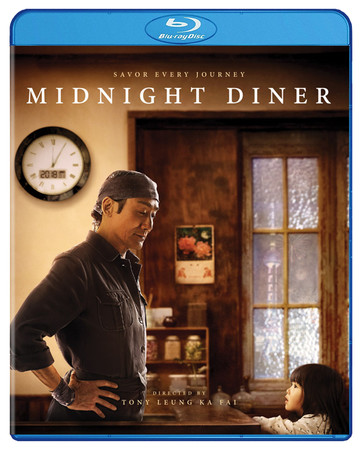 A small, counter-only restaurant, open daily from midnight to 7, is lovingly helmed by its mysterious owner and chef, a quiet enigma who provides no menu yet can make any dish the customer desires. Year after year, people flock from far and wide to the mysterious Midnight Diner to share their stories, savor delicious home cooking, and finally, to leave refreshed, feeling equally full and ready for their next adventure.

Hong Kong actor Tony Leung Ka Fai directed the film as his directorial debut, and also starred in the film. The film opened in China in 2019.

Abe’s manga centers on the proprietor of a small, mysterious cafeteria in Shinjuku and his customers. The cafeteria opens at midnight to fix customers any dish they request. The manga was nominated for the bookseller-selected Manga Taishō (“Cartoon Grand Prize”) in 2009. The manga was also nominated for Angoulême’s Best Comic Award and Audience Award in 2018.