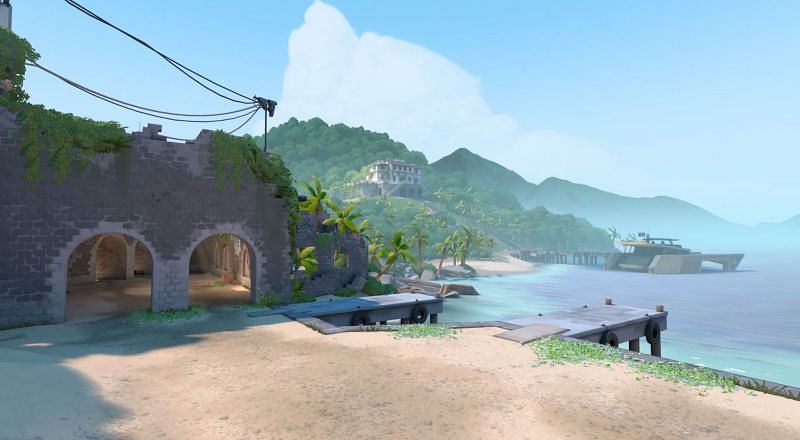 Valorant is all set to receive a new map, the sixth one, along with the Episode 2 Act 3 Battlepass. After multiple teases online, Breeze will be finally coming to the game in just a few days.

After officially announcing the arrival of Breeze in a previous tweet, Riot Games has finally revealed features of the new map that will be accompanying the latest Act.

You are now arriving at our Caribbean getaway, Breeze. Don’t get too comfortable.

As far as locational settings go, the Valorant devs have mentioned Breeze to be located somewhere within the southern part of the Bermuda Triangle. Moreover, it is a remote tropical island with luscious forests and sandy beaches.

Departing from the previous map, Icebox’s bleak visuals, Breeze will be much more colorful and will feature wide-open spaces that favor long-range encounters over close-quarter skirmishes.

The release date of Breeze in Valorant

Breeze will be released on April 27, 2021 along with the Episode 2 Act 3 Battlepass in Valorant.

Valorant’s Episode 2 Act 3 will not feature a new Agent, as Riot wants to focus more on the map pool heading into the VCT Stage 2 Masters. This event is set to take place in Reykjavík, Iceland, in May.

“The 2021 VALORANT Champions Tour Stage 2 – Masters in Reykjavik, Iceland will include VALORANT’s newest map, Breeze, in competitive play. With six maps in rotation, we’ll be introducing a new map veto and selection process that will take place ahead of each match.”

All in all, it seems like Valorant fans are in for a treat, as pro players would be competing in the first ever official LAN tournament in Valorant’s history, that too on a brand new map.

Inspired by the Caribbean Islands and tropical beaches, Breeze sets itself apart from the other maps in the map pool. Regarding the inspiration, Riot Developer Devon Fay said:

“The Breeze was heavily inspired by islands in the Caribbean. We loved the old forts and tropical beaches. After the cold, angular world of Icebox, we were really excited for the open, bright, colorful world of Breeze.”