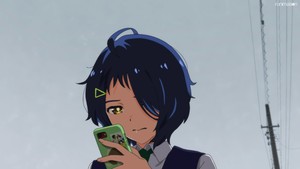 The worst thing you can say about an ending is not that it’s confusing, inconclusive, or disappointing, but that the rest of the story works better without it. Wonder Egg Priority was never going to have a perfect ending. Its glut of heavy and delicate themes were tricky enough to weave together on their own, and when a volley of late storytelling curveballs pelted WEP‘s plate, its chances of wrapping everything up dwindled into the infinitesimal. However, the prospect of a double-length finale special raised my hopes that we might get pretty close to a good capstone. And even when the first half of that special turned out to be a recap, I still held out hope for those remaining 20 minutes. You can do a lot with 20 minutes.

To its credit, Wonder Egg Priority does do a hell of a lot with its finale’s runtime. Unfortunately, most of it sucks.

This episode is a disaster. Gone is the brazen swagger which illuminated the brilliant first half of the series, and which still shone through the cracks of the messier second half. All we have here is a mad scramble, desperate and undignified, towards a dubious finish line. The animation and composite range from passable to embarrassing, and they do little to assuage writing that feels paradoxically panicked and flat. In hindsight, it’s naive for me to have had faith that this delayed special would be a solution to Wonder Egg Priority‘s notorious production woes. This special isn’t a salve; it’s the wound. Something went terribly wrong somewhere in this series’ planning and execution, and while it held itself together for an unbelievably long time, its Jenga tower has finally collapsed. This episode is the rubble.

However, I still feel compelled to live up to my title of “The Big WEP Defender,” and to be honest, I don’t hate all of these developments. Ai drifting apart from the others had roots in the last few episodes, and I think you could develop their separation organically in a way that said something about growing up and the ephemerality of friendship. Wonder Egg Priority always had a sinister edge to it, and this tension between the worlds of childhood and adulthood didn’t necessarily have to resolve nicely. Neiru being an AI is a lot more left-field, but that too has precedent with Frill. Neiru experienced the outside world, made friends, and grew up—all things that Frill wasn’t allowed to do—so Neiru could have been a great foil for their ultimate “enemy.” I don’t even mind that the revived people have no memory of their saviors, as cruel as it is. Since the beginning, I’ve repeated that this Egg Game couldn’t be as simple as its players had hoped. This also further supports my other repeated assertion that the Acca Bros are bad dudes willfully exploiting these girls’ naivete, which holds fast to the very last scene of the anime.

Some parts of this episode are unsalvageable, though. The most heinous example is the truth behind Koito’s suicide, which I’m almost too infuriated by to summarize. I just can’t fathom the amount of tone-deafness it takes to spin an uncomfortably creepy relationship between a teacher and student into a situation where the student shoulders all the blame for her suicide. Sexual assault survivors have to watch their rapists walk away scot-free an inordinate percentage of the time, and this episode has the gall to accuse Koito of perpetrating a false rape accusation. Meanwhile, Sawaki comes out looking positively cherubic in spite of his long history of red flags. I’ve no fondness for didacticism in art, but this sends a message that violently contradicts the series’ purported (and previously communicated) empathy with troubled and abused teenagers, and it adds no meaningful nuance to supplement that conflict. It just feeds into a tired and reactionary narrative that protects abusers in positions of power. And we still never hear Koito’s side of the story! Of course, there’s always the possibility that Sawaki is flat-out lying, but we’re well past the point of wishful thinking. The recap’s framing only further exonerates him of all suspicion, and I’m just too angry to give this subplot the benefit of the doubt anymore. This is the single worst way Wonder Egg Priority could have concluded Koito’s story.

All of these developments, from the most terrible to the most squandered, fall apart indiscriminately thanks to the episode’s clunkiness. The writing tries to squeeze another full season’s worth of swerves and twists into a small and flimsy container. Nothing sticks, and everyone behaves inexplicably. Wonder Egg Priority has plenty of wonderful examples of nonverbal communication, either between its characters or within their own interiority. None of that can be found here. I don’t mind that Ai rejects Neiru’s invitation, immediately regrets it, and reverses tack right at the very end. I only mind that I’m not invited to process these confusing and messy feelings alongside her. The same goes for Momoe’s and Rika’s lingering fears about their egg experiences, and the same especially goes for Neiru, who could have been the most complex character in the series, if she were allowed to be.

Incompetent execution aside, Wonder Egg Priority‘s ending only “works” if we accept that it is as deliberately mean-spirited as possible—which is, ironically, the nicest thing I can say about this episode. Artists should be allowed to challenge and upset their audiences. Sometimes, expectations are made to be subverted. I can understand a version of this story where Ai’s return to the egg gachapon inspires stomach-churning dread. However, I don’t think this is the appropriate ending for WEP. For all of its faults and its many evocations of dark subject matter, this story and these characters also exhibited plenty of strength, warmth, and sensitivity. WEP understood that sometimes a bittersweet conclusion is the best anyone has. Look at Rika and her mom at the end of episode 7. But I just don’t agree with the nihilistic narrative razing perpetrated by this finale. It’s too unnecessarily bitter. These girls deserved better.

Ultimately, as nasty as this special is, it still doesn’t ruin Wonder Egg Priority for me. It doesn’t take away the main series’ uncommonly strong collection of episodes, and it doesn’t totally invalidate the girls’ individual arcs. However, I think the series works better without this coda. Episode 12 was messy and inconclusive, but in addition to being a more competent 20 minutes of television, it also felt like a more appropriate note to leave Ai on—outmatched and wounded, but hopeful all the same. Episode 13’s last desperate grasp at science-fiction, metaphor, and commentary collapses with all the grace of an elephant balanced on the head of a pin. There’s a temptation to wish for a second season, to wish for a do-over, but I’d much rather see Shin Wakabayashi and this team move onto their next projects (ideally, ones with a different lead writer). They breathed incredible life into this series. I had an incredible experience following it. But right now, I think we’re all happy to finally deprioritize this egg.