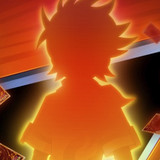 The Yu-Gi-Oh! SEVENS anime serves as the inspiration for the latest video game in the series, which Konami has officially lined up for an August 12 launch on Switch in Japan. The story for this one is original, and features the Rush Duel rules anime lead Yuga Ohdo cooked up in the series.

Those who pick up first-print copies of Yu-Gi-Oh! Rush Duel: Saikyo Battle Royale!! will get three exclusive Yu-Gi-Oh! cards along with the game. Pre-orders open on April 22, and securing a copy ahead of time will also net you an amiibo card.

Joseph Luster is the Games and Web editor at Otaku USA Magazine. You can read his comics at subhumanzoids. Follow him on Twitter @Moldilox.