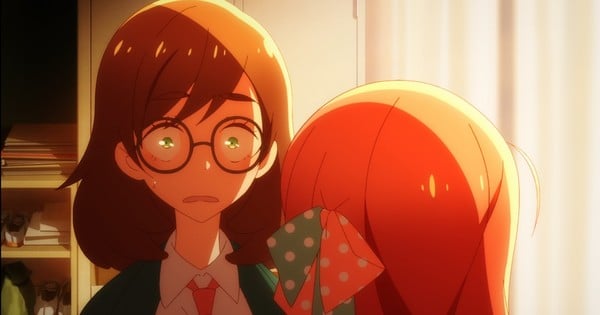 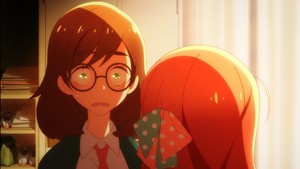 Irrespective of where the episode eventually goes, this week’s cold open is one of Zombie Land Saga‘s most buckwild and gut-busting moments. Deliberately mirroring the introduction to season one, starry-eyed Saga native Maimai stumbles down the street, saunters into the men’s bath, and knocks herself out cold in front of a flummoxed and nude Kotaro. I didn’t expect to be assaulted by slapstick again right after Tae’s madcap escapades last week, but I’m also never going to ask this series to be less goofy. My favorite part of this disaster, however, is Kotaro’s reaction, scooping up the presumably dead girl and presenting her corpse to the rest of Franchouchou as their newest member. After all, who needs to call an ambulance when you have the Necronomicon on your side? The gang, to their credit, don’t give their manager an inch, grilling him ruthlessly as he grows more and more hysterical. Kotaro is very fun when he’s acting like an eccentric jerk, but there’s just something even more hilarious about Mamoru Miyano‘s panicked delivery when his character gets pushed onto his back foot. Coupled with the inherent black comedy of the situation, this is exactly the kind of sideways material that keeps endearing me towards Zombie Land Saga.

Kotaro’s reports of Maimai’s death turn out to be greatly exaggerated, thankfully, although this does little to mollify the complexity of the situation. Ironically, the audience already knows that Franchouchou’s undead jig is up due to last week’s head mistake, but it’s fun to watch the gang deal with a completely different exposure in real-time (especially when they can pin the blame on Kotaro). Their discussion dips into black comedy yet again as Yugiri nonchalantly suggests they might have to kill her after all, and this is exactly the kind of dialogue I want in my idol anime. It helps, however, that Maimai is already a big fan of theirs, and she doesn’t possess a single vindictive bone in her body. It’s easy to imagine how the episode might have gone if Maimai had just blackmailed them into making her a member, but the actual situation is more nuanced—and more interesting.

Thematically, the episode utilizes Maimai to explore the divide between idols and their fans, as well as the lack of a divide. Maimai, for instance, is frequently compared to pre-zombification Sakura, both in the text and subtext. Both girls are huge idol fans who, inspired by their favorite group, aim to become idols themselves. It’s a goal that combines individual improvement (learning to sing, dance, etc.) with extrinsic validation (growing closer to your heroes in the industry). Both of these facets are perfectly valid motivations, and I’d wager most people’s lives or careers are influenced by one or both of these. We emulate what we like. Celebrity culture can quickly become weird and dehumanizing, however, and even Maimai, as nice as she is, isn’t exempt from it.

The messaging here is further complicated by the contradictory qualities of Franchouchou: they are idols, yet they are also not idols. I mean that both in the sense that they are not your typical idols, even ignoring the zombie thing, and in the sense of the zombie thing, ignoring that they’re idols. Thus, Maimai’s attempts to join the group are made difficult by twofold hurdles. She is a fan, not an idol; and she is alive, not a zombie. The first hurdle, however, isn’t that important to the story being told here. Franchouchou are quick to welcome her into their fold, and Maimai’s only major hurdle is her own clumsiness. I do think this is a bit of a missed opportunity, because the space between a fan and the object of their fandom is an increasingly thorny and fascinating one. That relationship is rather frictionless here, and consequently, Zombie Land Saga feels more toothless than I’d like a counter-idol-culture anime to be.

The second hurdle, however, does raise some interesting conflicts. The symbolism of the girls’ zombie status can be interpreted in a lot of different ways, but this week’s saga is pretty blatant about using zombification as a metaphor for marginalization. When Maimai invites the gang out for a soak, she doesn’t realize how insensitive that is until the girls gently let her know. Yes, on the surface level, it makes sense that it’d be pretty hard for them to hide their rotting patchwork skin in a bath setting, but more broadly, this references how many public spaces are hostile to marginalized people, and how many people with privilege don’t even realize it. Driving a nail into this point is the fact that it’s Lily who speaks up first about not being able to go. Public baths that are segregated by gender, like the one in the episode, aren’t likely to accommodate transgender customers. Even if they were all alive, Lily might not have been able to join them in the women’s bath. It makes me think, too, of all the trans panic legislation being passed in the United States right now, under the silent acquiescence of the cis population at large. Maimai loves Franchouchou, and she doesn’t mind that they’re zombies, but she also hasn’t though much about their struggles as zombies.

While I do believe a queer reading of Zombie Land Saga has legs (even if they’re dismembered ones), it also ends up looking pretty clumsy no matter how you slice it. The show has used zombification as a metaphor for too many things to allow any one interpretation to feel elegant, and the idol stuff only conflates things further. Still, however, this marginalized subtext is the lens through which Maimai’s arc makes the most sense. In the end, she realizes how much Franchouchou have struggled to get where they are, and she doesn’t feel right riding their coattails without that shared experience. She’s not the same as them, and she shouldn’t pretend to be the same as them, but that doesn’t mean she can’t still support them. It evokes too much modern social justice discourse about appropriation and allyship to be coincidental. The approach isn’t as focused and thoughtful as I’d like, but it still concludes on the right note.

Truth be told, I didn’t begin this review with the intent to write so much about the show’s themes and subtext, yet I suppose that’s just another way that Zombie Land Saga continues to surprise. I should also say that, while all of this was churning in the background, the anime delivered another funny and colorful episode that had me stifling laughter during my lunch break at the office. And what better way to leave us hanging than by teasing the long-awaited Yugiri episode next week? Finally, Franchouchou’s most ethereal member will get her due (and in a two-parter no less). If she gets material half as good as her suggesting they all kill a nearsighted teen girl to protect their identities, then I think we’re all in for a treat. 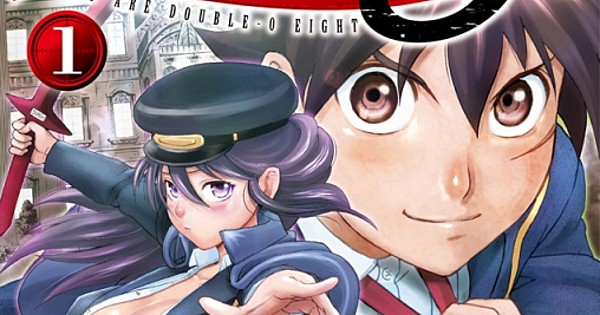 [ad_1] Matsuena launched spy action manga in February 2018 This year’s 24th issue of Shogakukan‘s Weekly Shonen Sunday magazine revealed on Wednesday that Shun Matsuena‘s Kimi wa 008 (You Are 008) manga has entered its climax. The spy action story centers on high school student Eito Akashi, who is discouraged about the prospect of failing… 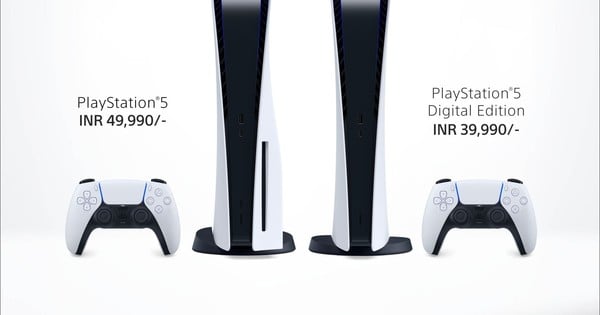 [ad_1] Pre-orders for restock went live on May 17 at 12:00 p.m. Sony Center’s website states that pre-orders for the PlaySation 5 restock in India will be processed on May 24. Customers can pick up their orders from physical Sony Centers on May 24 while online retailers such as Amazon, Flipkart, Games The Shop, Prepaid Gamer… 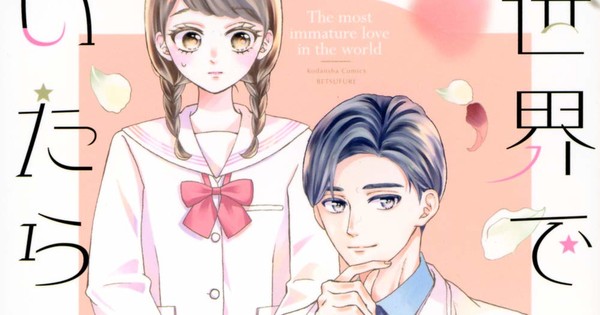 [ad_1] Romance manga about antisocial girl, high class guy launched in October Manga creator Yuka Kitagawa revealed on Twitter on Tuesday that Kitagawa’s Sekai de Ichiban Itaranu Koi (The Most Immature Love in the World) manga will end with its eighth chapter in the next issue of Kodansha‘s Bessatsu Friend magazine, which will ship on… 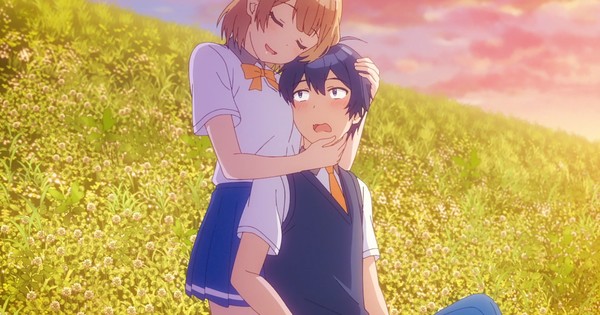 [ad_1] What is this? The story centers around Sueharu Maru, an average 17-year-old high school boy who has never had a girlfriend, and the “heroine battle” between his beautiful first crush Shirokusa Kachi and his childhood friend Kuroha Shida. Osamake: Romcom Where The Childhood Friend Won’t Lose is based on Shūichi Nimaru‘s light novel series… 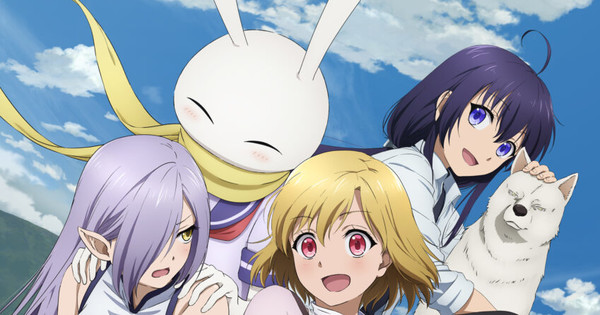 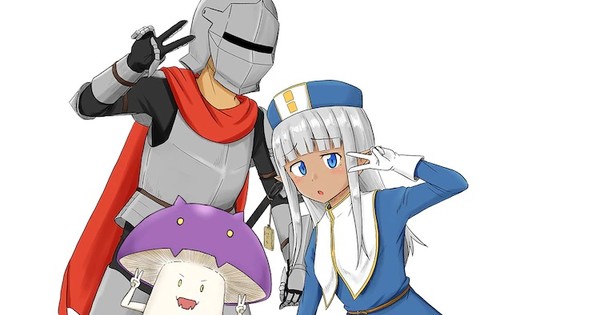